This past weekend was the Stop-Watch Gang's second annual writing retreat, again hosted at the SWG secret southwestern Ontario lair (aka, Suzanne's house in Kitchener). And we are especially grateful to Suzanne and her boyfriend Michael for their hospitality considering that when we arrived there had been no power for 18 hours! They did herculean duty moving frozen and perishable food all over town to friends and relatives with power so that nothing spoiled and the SWG could eat well as we wrote.

As with last year, Costi Gurgu was the undisputed winner of the 16 hour write-a-thon, with a grand total of 11,068 words of new fiction (and we hate him all the more because he's writing in his second language!)


And now, a graphic! 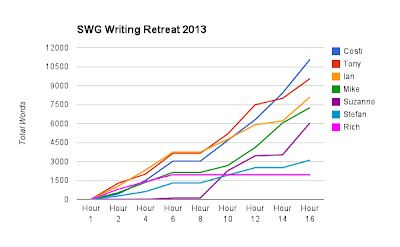 Also, fun fact discovered this weekend: did you know that the 80s SF classic The Last Starfighter was actually an American remake of a German movie whose title translates as The Last Spaceman? In that movie, aliens contact the winner of a pinball game to see when he wants to start intergalactic war. True story.

Or we made it up.

One of the two.

- Stephen
Posted by Stephen Kotowych at 05:30